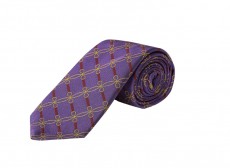 To celebrate the 60th anniversary of Her Majesty the Queen’s Coronation in June 1953, Thresher & Glenny has created a limited edition Coronation Tie to mark the occasion.

We haven’t produced a Royal tie since 1935. Seeing the opportunity for ‘the nation to express its great loyalty to and affection for the Royal Family’, we celebrated King George V’s silver jubilee by designing what was called then ‘a souvenir tie’. The tie in question ‘blended the shades of His Majesty’s racing livery in a manner that bears no resemblance to a club tie.’

Seventy-eight years on, the 2013 tie has been produced in London and is hand made from the finest spun silk with Her Majesty’s racing colours very much in mind. The first eleven ties have been given to the Royal Family and we were thrilled to see The Earl of Wessex wearing his at the Coronation Festival at Buckingham Palace.